Kilogram is a unit used to measure mass. In this chapter we will discuss about the standard unit of mass called ‘Kilogram’ and find the relation between kilogram and many units like grams, milligrams, pounds, ounces and tons. Learn more about kilograms in this unit!

What Is a Kilogram?

The standard unit of measurement defined by the International System of Units (SI) to measure mass is called Kilogram. It is represented by the symbol ‘kg’. It is the metric unit to measure the mass of an object and is the standard unit of mass used across the world.  The word 'kilo' is derived from a greek word 'kiló' which means 'thousand' ; and the word 'gram' is from a latin word 'gramma' which means 'a small weight'. Kilogram is commonly referred to as 'kilo' and represented as 'kg'. Mass and weight are different quantities of measurement. While mass is measured in 'kg', weight is measured in 'Newton'.

Kilogram is the next higher unit to grams.It is used to measure medium to high weighing objects. Kilogram is used to weigh body weight, vegetables, fruits and is denoted by the symbol ‘kg’, where ‘k’ stands for kilo and ‘g’ stands for gram.There are so many objects around us that are of different weights and masses. To measure the mass of any object there are some common units in the metric system of measurement. To know more about metric conversion click here.

A gram is also a unit of mass defined by the international system of units(SI). It is one thousandth of a kilogram. It is denoted by the symbol ‘g’ and is used to measure light weighted objects like a pen or a chocolate bar. Hence, the relation between kilogram and grams is given as, 1 kilogram (Kg) = 1000 grams (g).

We can convert kilogram into USCS units: pounds, ounces and tons using the below given relations.

The relation between kilogram and pounds is given as, 1 kilogram (kg) = 2.2 pounds (lb).

Ton is the heaviest unit to measure mass and is denoted by the symbol 't'. It is used to measure high weighing objects like machines, cars, and trucks with heavy loads. The relation between kilogram and tons is given as, 1 kilogram (kg) = 0.0011 ton(t).

Now that we learnt to convert kilograms to grams, milligrams, pounds, ounces and ton, let us try these units into kilograms. 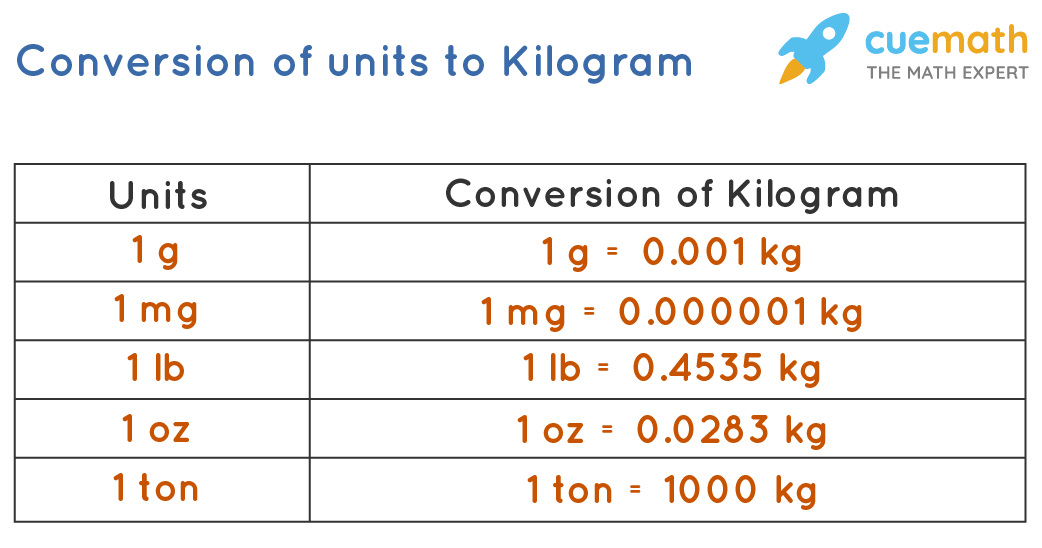 How Much is a Kilogram in Pounds?

How Many Grams are There in a Kilogram?

How Do You Convert Kilogram to Tons?

How Many Ounces are There in a Kilogram?

How Many Kilograms are there in a Ton ?

How Many Kilogram are There in a Milligram?

How to Convert Pounds to Kilogram?