The metric system of measurement is the standard way of measuring distance, calculating height, and most of the other day-to-day items. For instance, let's consider a jar of milk. We use liters to find the volume of milk and meters (or centimeters) to find the height of the jar. This is because these metric units are followed in most places worldwide and are called SI units (International System of Units). Let's begin and learn more about the metric system.

What is Metric System?

Everything around us, right from the amount of sugar you add to a cake to the length of a football field, has a value of the measurement. We measure each object according to its length, weight, volume, or time in a different manner. The concept of "Metric System" is introduced with these measurements. By definition, the metric system of measurement in mathematics is the set of standard units defined to measure length, weight, area, and capacity. It is based on the decimal system as it includes numbers in powers of 10.

There are various places where we use metric units in our daily life. This metric system is implemented and followed in various fields like science, medicine, governance, defense, and so on. Some of the metric system examples can be listed as given below:

The metric system is an easy-to-use measurement system as it has units in terms of powers of 10. At the time of the French revolution, in around 1790, it was realized that the existing systems of measurement had become impractical and of less usage for trade purposes, so a system based on the decimal values of grams and meter came into use for practical purposes which was originally the idea of John Wilkins and Gabriel Mouton. It was easier to compute the metric values as compared to the other systems of measures.

Gabriel Mouton was considered the founding father of the metric system of measurement. In 1668, John Wilkins, an English clergyman, came up with a proposed system of measuring length, mass, area, and volume. These standard units were based on real-life discoveries. The standard unit of length was derived from the length of a pendulum that had a half-beat of one second, the unit of mass was based on the mass of 1 liter of water, etc. Then two years later, in 1670, Gabriel Mouton, the vicar of St. Paul’s Church in France, proposed a unit of length based on the dimensions of the earth. He also proposed the usage of decimal multiples for the unit of length.

There are various metric units used for measuring length, mass, area, and capacity. For example, millimeters, centimeters, meters, and kilometers are the metric units of the measurement of length. Grams and kilograms are the units for measuring weight. Look at the table given below to understand all the metric system units used for different purposes.

We will be using this metric system chart to understand the metric conversions explained below.

Let us learn conversions in each area one by one. The metric units for length are explained in the next section. In this section, we will be focussing on the metric system units of weights and capacity.

The standard unit for measurement of weight is a kilogram. The standard tool we use to measure weight is the beam balance or the weighing scale. These are some examples that show where the weight measurements are typically used:

Look at the chart showing conversions of metric units of weight. 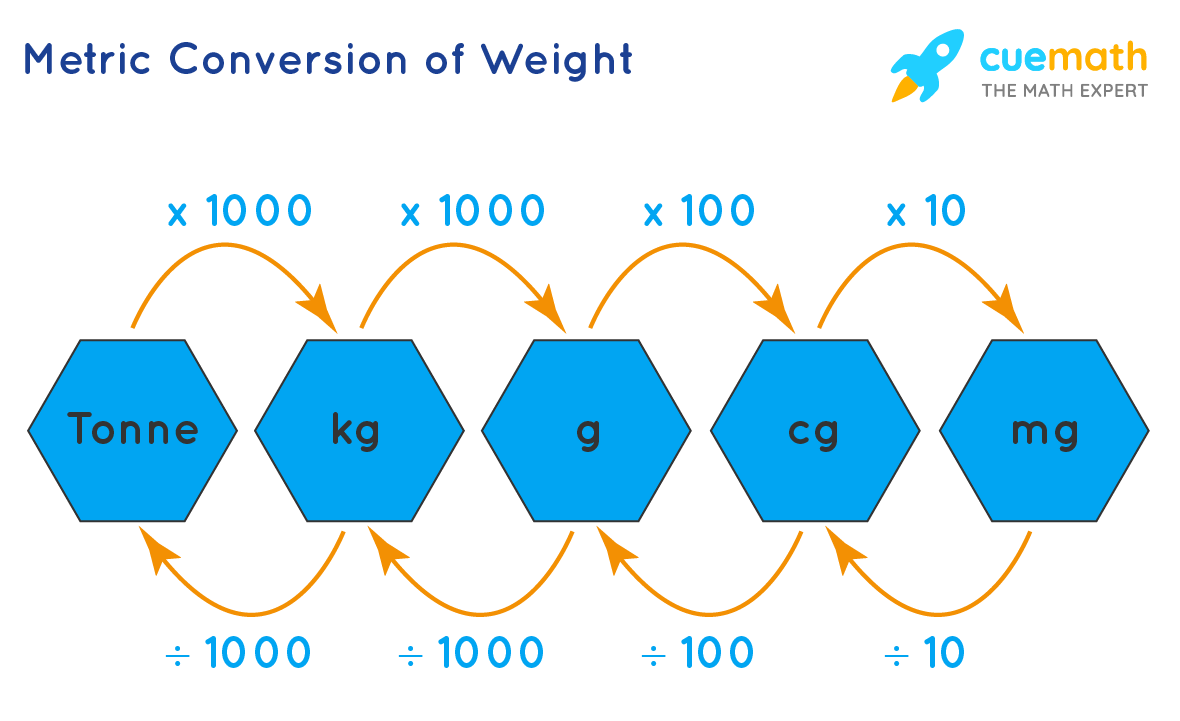 Look at the chart showing conversions of metric units of measuring capacity. 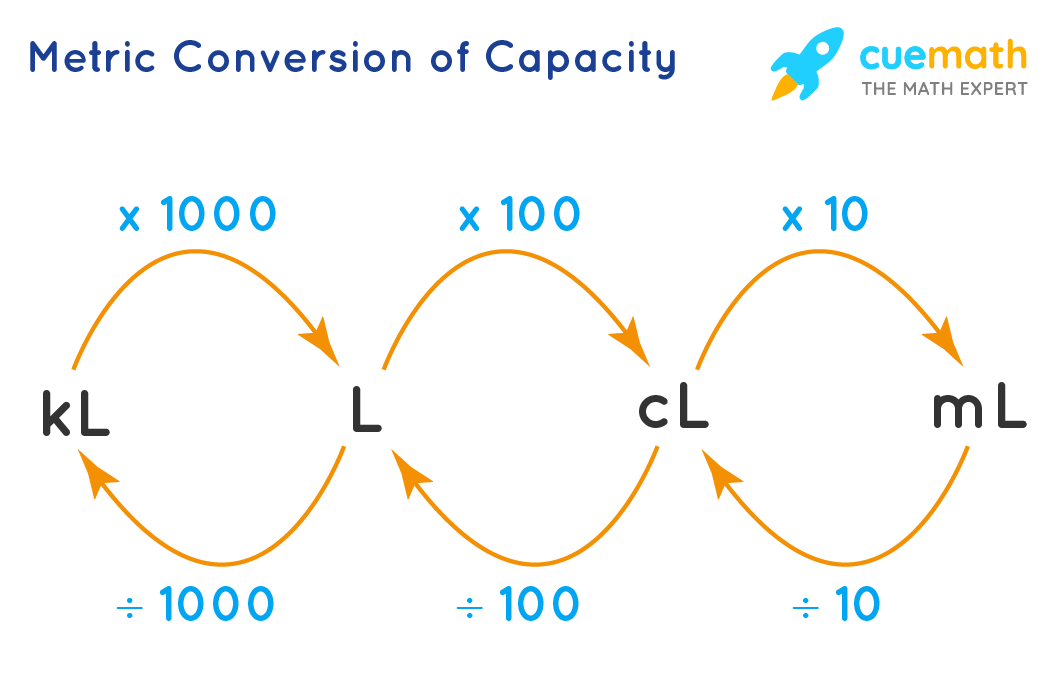 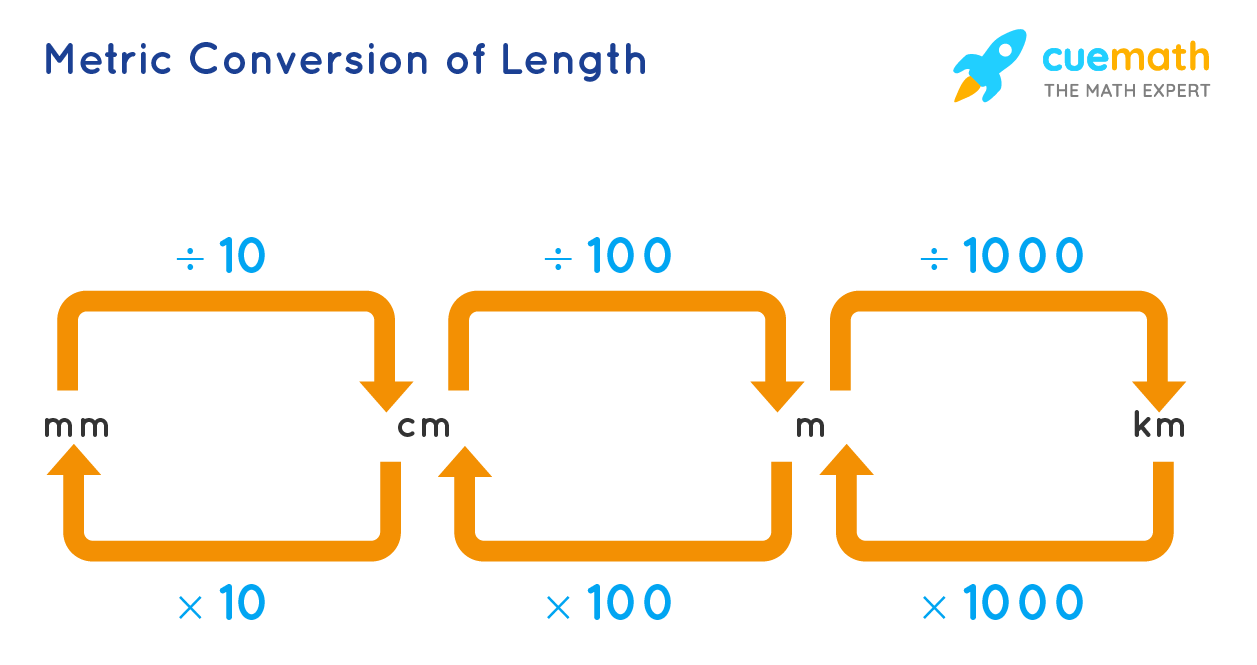 It shows that millimeters (mm) can be converted to centimeters (cm) by dividing the given value by 10, cm can be converted to m by dividing the given value by 100, and so on. Just observe the direction of arrows and look for the multiplying factor in each of the cases. While going from larger units to the smaller units (for example, km to m, m to cm, and so on), we multiply the value by an appropriate power of 10. On the other hand, while moving from smaller units to larger units (for example, mm to cm, cm to m, and m to km), divide the value by an appropriate power of 10.

Given below are a few important notes on the metric system in math.

Check these articles related to the metric system of measurement.

What is the Metric System?

The metric system of measurement is the standard system based on decimal values. It has unit conversions based on the powers of 10. One can measure length, weight, area, capacity, speed, distance, time, etc using the metric system units.

What Countries don't Use the Metric System?

Three countries including the US, Myanmar, and Liberia do not officially use the metric system.

How does the Metric System Work?

The metric system works with some standard set of units such as meter, kilogram, liter, hours, etc to measure length, weight, capacity, and time respectively.

What is the Unit of Force in Metric System?

The SI unit of force is Newton under the metric system.

What are the 7 Metric Units?

What are the Units Under the Metric System?

The metric system has meter, centimeter, millimeter, and kilometer for length; kilograms, milligrams, centigrams, and gram for weight; liter, kiloliter, centiliter, and milliliter for capacity; hours, minutes, seconds for time.

What is the Basic Unit of Length in the Metric System?

What Metric System does the US Use?

The US uses the US customary system of measurement officially which includes units like inches, pounds, ounces, feet, miles, etc.