In mathematics, just like every quantity has a unit of measurement, angles also have units for measurement. For measuring the angles, degrees and radians are used as the units of measurement. It is essential for one to know how to convert degrees to radians since most often, radians are used instead of degrees to measure angles. These are some of the common applications of radian measure: area of a sector of a circle, arc length, and angular velocity. One should essentially use radians when they are dealing with either object moving in circular paths or parts of a circular path. The problem statement can have the angle measured in degrees, but we should always convert the angles in degrees to radians before using them in any calculations. In this article, let's learn about the degrees to radians formula and the conversion table with solved examples.

The two units of measurement that are used for measuring angles are degrees and radians. We can convert the measure of any angle given in degrees to radians as per our convenience. This conversion can be done following some very basic calculations. Let us understand the concept of both the units and establish a relationship between them.

Radian is another unit of measuring an angle in geometry. One radian is the angle that is formed at the center of a circle by an arc whose length is equal to the radius 'r' of the circle. One complete counterclockwise rotation is equal to 2π in radians. The below-given image shows the measure of one radian as 57.296°. Also, a right angle is expressed as π/2 radians, and a straight angle is expressed as π radians.

We can compare the measure of angles for a complete rotation in radian and degrees as, 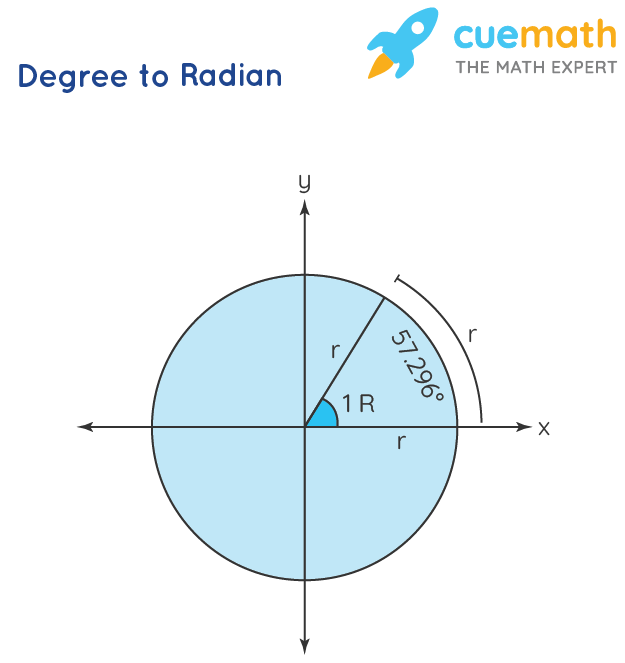 Converting degrees to radians formula is a generalized formula used to convert the given value in degrees to value in radians. We can say that to convert degrees into radians, we multiply the angle (in degrees) by π / 180.

Derivation of Degrees to Radians Formula

Degrees to Radians Equation: The relation between degree measure and radian measure can be represented with this equation:

We obtain the equation,

This gives us the formula to make conversions from degrees to radians and vice versa.

How to Convert Degrees to Radians?

The below-given table shows the radian values for the corresponding angle measures in degrees. The first table shows the degrees to radians angles conversion from 0° to 90°.

The second table shows the degrees to radians angles conversion from 120° to 360°.

The below-given chart shows degree measures and their corresponding radian measures. We can also use this chart to convert the degrees to radians to make the calculations easier and faster. In the below-given chart, we can see that 0° equals 0 rad and 360° equals 2π rad 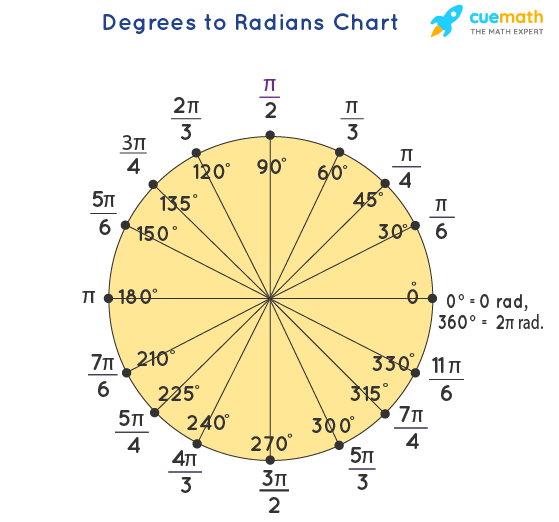 Important Notes on Degrees to Radians

Here is a list of a few points that should be remembered while studying degrees to radians:

Related Articles on Degrees to Radians

Check out the following pages related to degrees to radians:

Examples on Converting Degrees to Radians

Practice Questions on Degrees to Radians

FAQs on Degrees to Radians

How Do You Convert Degrees to Radians?

What Is Degrees To Radians Formula?

How to Convert 30 Degrees to Radians?

How to Convert 90 Degrees to Radians?

What Are 60 Degrees Converted to Radians?

What Are 180 Degrees in Radians?

How Are Radians Used in Everyday Life?

These are some of the ways how radians are used in everyday life:

Why Would Radians Be More Useful in the Real World Than Degrees?

Although, for measuring the angles, both degrees and radians are used as the units of measurement, most often, mathematicians prefer using radians instead of degrees to measure angles. Radian measures can be used while calculating the area of a sector of a circle, arc length, and angular velocity. It is essential for one to always use radians when they are dealing with either objects moving in circular paths or parts of a circular path. Even if the initial problem statement has the angle measured in degrees, we should always convert these angles to radians before using them in any calculations.

How To Use Degrees To Radians Formula?

What Is the Degree To Radian Formula For Converting a Negative Degree Into Radians?

To convert a negative degree into radian, the same method is used for positive degrees. Just multiply the given value of the angle in degrees by π/180.

How To Derive Degrees To Radians Conversion Formula?