BODMAS rule is an acronym that is used to remember the order of operations to be followed while solving expressions in mathematics. It stands for B - Brackets, O - Order of powers or roots, (in some cases, 'of'), D - Division, M - Multiplication A - Addition, and S - Subtraction. It means that expressions having multiple operators need to be simplified from left to right in this order only. First, we solve brackets, then powers or roots, then division or multiplication (whichever comes first from the left side of the expression), and then finally, subtraction or addition, whichever comes on the left side.

In this lesson, we will be learning about the BODMAS rule which helps to solve arithmetic expressions, containing many operations, like, addition (+), subtraction (-), multiplication (×), division (÷), and brackets ( ).

BODMAS, which is referred to as the order of operations, is a sequence to perform operations in an arithmetic expression. Math is all about logic and some standard rules that make our calculations easier. So, BODMAS is one of those standard rules for simplifying expressions that have multiple operators.

In arithmetic, an expression or an equation involves two components:

An operator is a character that combines two numbers and produces an expression or equation. In math, the most common operators are Addition (+), Subtraction (-), Multiplication (×), Division (÷). For mathematical expressions or equations, in which only a single operator is involved, finding the answer is fairly simple. In the case of multiple operators, finding a solution becomes a little trickier! Let us understand this with an example. Jenny and Ron solved a mathematical expression 6 × 3 + 2 separately. The following are the two different methods by which Jenny and Ron solved the expression:

As we can observe, Jenny and Ron got different answers. In mathematics, we know that there can only be one correct answer to this expression. How to decide who is correct? In such cases, we use BODMAS to find the correct answer. Let us look at the example given below to get an idea of how BODMAS works: 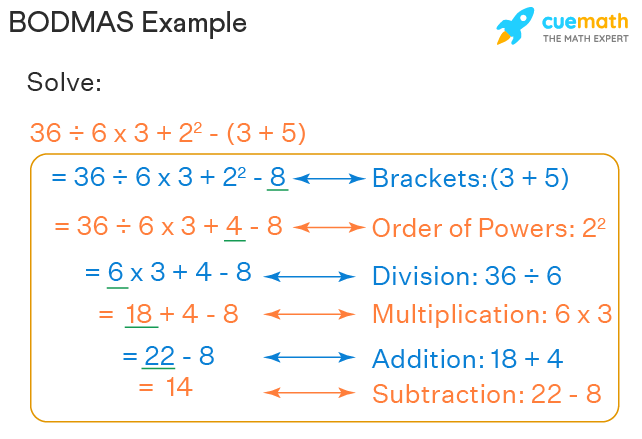 The BODMAS rule is used to evaluate mathematical expressions and to deal with complex calculations in a much easier and standard way.

According to the BODMAS rule, to solve any arithmetic expression, we first solve the terms written in brackets, and then we simplify the exponential terms, or solve for the operation 'of', which means multiplication, and move ahead to division and multiplication operations, and then, in the end, work on the addition and subtraction. Following the order of operations in the BODMAS rule, always results in the correct answer. Simplification of terms inside the brackets can be done directly. This means we can perform the operations inside the bracket in the order of division, multiplication, addition, and subtraction. If there are multiple brackets in an expression, all the same types of brackets can be solved simultaneously. For example, (14 + 19) ÷ (13 - 2) = 33 ÷ 11 = 3.

Observe the table given below to understand the terms and operations denoted by the BODMAS acronym in the proper order.

BODMAS and PEMDAS are two acronyms that are used to remember the order of operations. The BODMAS rule is almost similar to the PEMDAS rule. There is a difference in the abbreviation because certain terms are known by different names in different countries. While using the BODMAS rule or the PEMDAS rule we should remember that when we come to the step of division and multiplication, we solve the operation which comes first from the left side of the expression. The same rule applies to addition and subtraction, that is, we solve that operation that comes first on the left side. 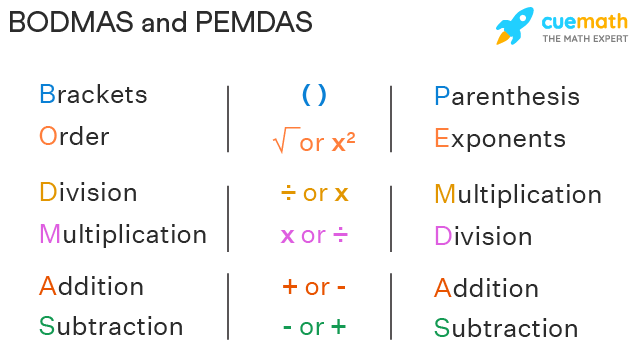 When to Use BODMAS?

The simple rules to remember the BODMAS rule are given below:

One can make some common errors while applying the BODMAS rule to simplify expressions and those errors are given below:

What is the Bodmas Rule in Mathematics?

How does BODMAS Rule Work?

In any arithmetic expression, if there are multiple operations used, then we need to solve the terms in the order of the BODMAS rule. We solve the part written in brackets first. After solving the brackets, we carry out the multiplication and division operations, whichever comes first in the expression from left to right. Then, we get a simplified expression with only addition and subtraction operations. We solve addition and subtraction from left to right and get the final answer. This is how BODMAS works.

Does BODMAS Apply when there are no Brackets?

Yes, even if there are no brackets, the BODMAS rule is still used. We need to solve the other operations in the same order. The next step after Brackets (B) is the order of powers or roots, followed by division, multiplication, addition, and then subtraction.

What does the O in Bodmas Stand for?

O in Bodmas stands for Order which means simplifying exponents or roots in the expression, if any, before arithmetic operations. In certain countries, 'O' is used to represent 'of' which again means multiplication.

How to Apply the Bodmas Rule?

BODMAS rule can be applied in case of expressions that have more than one operator. In that case, we simplify the brackets first from the innermost bracket to the outermost [{()}], then we evaluate the values of exponents or roots followed by simplifying multiplication and division, and then, at last, perform addition and subtraction operations while moving from left to right.

Why is the Order of Operations Important in Real Life?

The order of operations is a shorthand rule that enables you to follow the right order to solve different parts of a mathematical expression. It is a universal rule to solve all mathematical operations to get the correct answer.

When is the Bodmas Rule not Applicable?

Who Invented the Bodmas Rule? When was it Introduced?

BODMAS rule was introduced by a mathematician, Achilles Reselfelt in the 1800s.

What is the Full Form of Bodmas Rule?

Do Calculators Use BODMAS?

Calculators also use the BODMAS rule. The scientific calculators automatically apply the operations in the correct order.