Classification of triangles is done according to the length of their sides and the measure of the angles. A triangle is a simple polygon with 3 sides, 3 interior angles, and 3 vertices that are joined with each other and it is denoted by the symbol △. This is the most common shape seen in math and nature and is of various types. In this article, classifying triangles is seen in detail along with a few solved examples to understand the concept better.

Let us see each type in detail.

Classification of Triangles Based on Sides

A triangle consists of three sides but the factor to classify them is the length of the sides. It is specifically based on the ratio of the lengths of the sides with one another rather than the unit measure. Hence, triangles are classified on the number of sides with the same length equal to each other or not equal at all. The three types of triangles are equilateral triangle, scalene triangle, and isosceles triangle.

The word isosceles is derived from the Greek word 'iso' which means same and 'skelos' which means leg. This type of triangle has two sides of the same length. The two equal sides of an isosceles triangle are called the legs and the angle between them is called the vertex angle or apex angle. 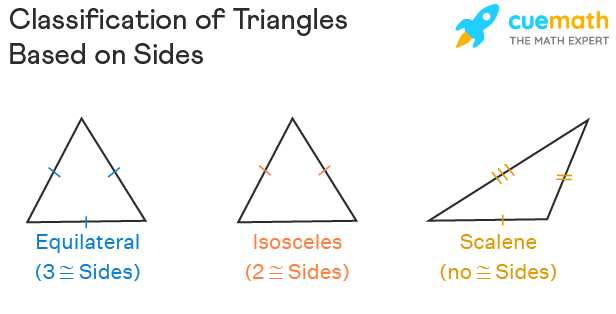 Classification of Triangles Based on Angles

Triangles can also be classified on the basis of angles. All triangles have three interior angles whose angle measurements sum to 180° with different combinations of angles depending on the type of triangle. The three different types are acute triangle, obtuse triangle, and right triangle.

Acute triangle is a type of triangle where all three interior angles are acute angles or less than 90°. The sides of an acute-angled triangle can be equal or unequal depending on whether the triangle is equilateral, isosceles, or scalene.

An obtuse-angled triangle or obtuse triangle is a type of triangle whose one of the vertex angles is bigger than 90° and the sum of the other two angles is less than 90°. The side opposite to the obtuse angle is considered the longest. 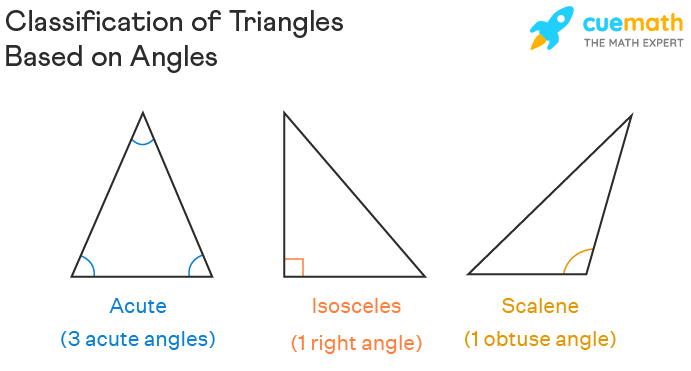 Classification of Triangles Based on Angles and Sides

The different types of triangles are also classified according to their sides and angles as follows:

Listed below are a few topics related to classifying triangles, take a look!

What is the Classification of Triangles in Geometry?

What are the 3 Triangles Classified Based on their Angles?

On the basis of angles, triangles are classified into acute triangle, right triangle, and obtuse triangle.

What are the Triangles Classified Based on Sides?

On the basis of sides, triangles are classified into 3 types.

What Triangles Have 3 Lines of Symmetry?

What Triangles Have a Reflection Symmetry?

All equilateral and isosceles triangles have reflection symmetry.

What are the 6 Types of Triangles?

What is the Difference Between Equilateral and Equiangular Triangle?

Both the triangles are considered as regular polygons. The main difference between the two triangles is that an equilateral triangle or polygon has congruent sides like a rhombus whereas an equiangular triangle or polygon has congruent interior angles like a rectangle. If a polygon is both equilateral and equiangular, it is considered a regular polygon.