Relations in math help to give a way of establishing a connection between any two objects or things. A relation describes the relationship between two objects that are usually represented as an ordered pair (input, output) or (x, y). Here, x and y are elements from sets.

Relations have several applications especially in the field of computer science to create relational database management systems (RDBMS). This article will elaborate on relations, their types, how to link elements from two sets using relations and associated examples.

What is Relation in Math?

Relations in math are used to describe a connection between the elements of two sets. They help to map the elements of one set (known as the domain) to elements of another set (called the range) such that the resulting ordered pairs are of the form (input, output). Furthermore, special types of relations that can be used to establish a correspondence between two quantities are known as functions. It can also be said that a function is a subset of a relation.

Relations in maths is a subset of the cartesian product of two sets. Suppose there are two sets given by X and Y. Let x ∈ X (x is an element of set X) and y ∈ Y. Then the cartesian product of X and Y, represented as X × Y, is given by the collection of all possible ordered pairs (x, y). In other words, a relation says that every input will produce one or more outputs.

Relations can be represented using different techniques. There are five main representations of relations. These are given as follows:

Roster Form: In roster form, all the possible ordered pairs of the two sets that follow the given relation are written. Using the same example as mentioned above, the relation, the elements of set X are the positive square roots of the elements of set B is represented as R = {(5, 25), (6, 36), (7, 49)}.

Arrow Diagram: Such a diagram is used to visually represent the relation between the elements of the two given sets. The arrow diagram of the above-mentioned example is given as 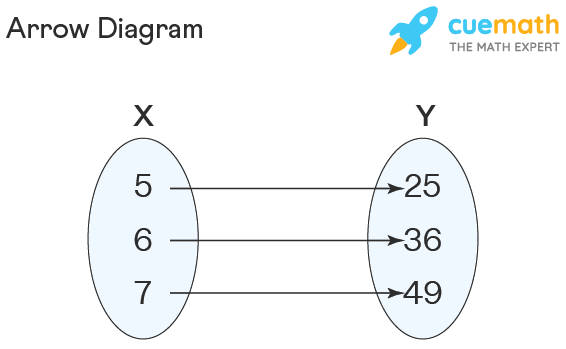 Tabular Form: When the input and the output of a relation are expressed in the form of a table it is known as the tabular representation of a relation. In this, a table is drawn with two columns. The first one denotes the input and the second expresses the output. Using the relation that the elements of X = {5, 6, 7} are the positive square roots of the elements of Y = {25, 36, 49}, the table is given as follows:

The fifth representation that uses the graphing method will be covered in upcoming sections.

An equivalence relation is a type of relation that is symmetric, transitive, and reflexive.

One to One Relation

One to Many Relation

Many to One Relation

Many to Many Relation

Relations also be represented graphically using the cartesian coordinate system. An element of a relationship can either be expressed in the form of an ordered pair, (x, y) or it can be given in the form of an equation (or inequality). The ordered pair represents the position of points in a coordinate plane. Suppose a relation is given as y = x - 2 on the set of all real numbers, then the steps to plot the graph are as follows: Important Notes on Relations in Math:

Examples on Relations in Math

Practice Questions on Relations in Math

FAQs on Relations in Math

What is Relation Definition in Math?

A relation in math gives the relationship between two sets (say A and B). Every element of a relationship is in the form of ordered pair (x, y) where x is in A and y is in B. In other words, a relation is a subset of the cartesian product of A and B.

What are Functions and Relations in Math?

A relation helps to establish a connection between the elements of two sets such that the input and output form an ordered pair (input, output). A function is a subset of a relation that determines the output given a specific input. All functions are relations but all relations are not functions. For example, R = { (1, 2), (1, 3), (2, 3)} is a relation but not a function as 1 is mapped twice (to both 2 and 3).

What are the Different Types of Relations in Math?

There are nine different types of relations in math. These are given as follows:

There are four other types of relations based on mapping.

What is a Relation Equation?

How is a Relationship in Math Represented?

There are 5 commonly used ways to represent a relation. These are the set-builder form, the roster form, the tabular form, the arrow diagram, and by using a graph.

How Do You Write a Relation in a Graph?

What are Symmetric Relations in Math?

Are all Functions Relations in Math?