Transversal
Go back to  'Geometry'

You check out the interactive examples to know more about the lesson and try your hand at solving a few interesting practice questions at the end of the page.

Both roads on the highway that go to and fro are parallel.

Now, imagine these two roads are two parallel lines. Is it possible to calculate the distance between these two lines?

In fact, you can. Parallel lines are cut by a transversal. There are plenty of math transversal examples that we will see in this chapter, but before we get there, let us first understand what transversals are. 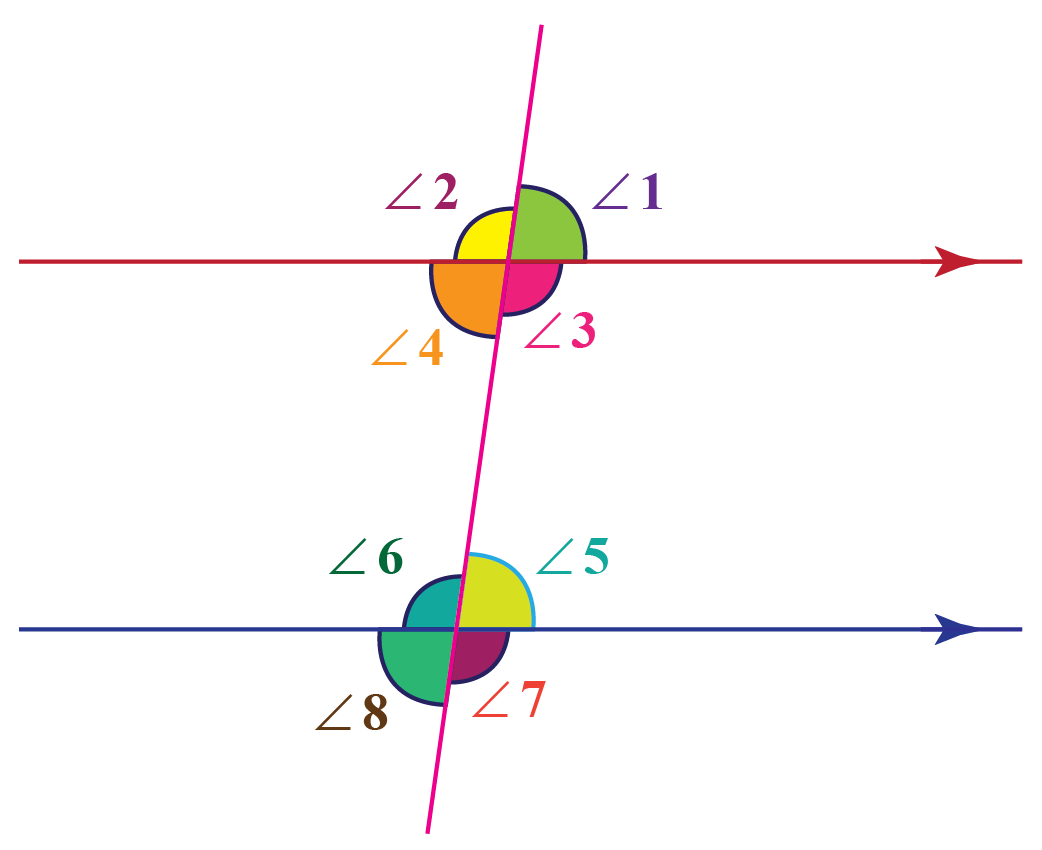 Well, transversal is one of the main connecting links between any two lines (or parallel lines). In this article, we will learn about such transversals and how they help us in finding different properties of the two lines.

What are Transversals and Transverse Lines?

For two or more lines, a transversal is any line that intersects two lines at distinct points. 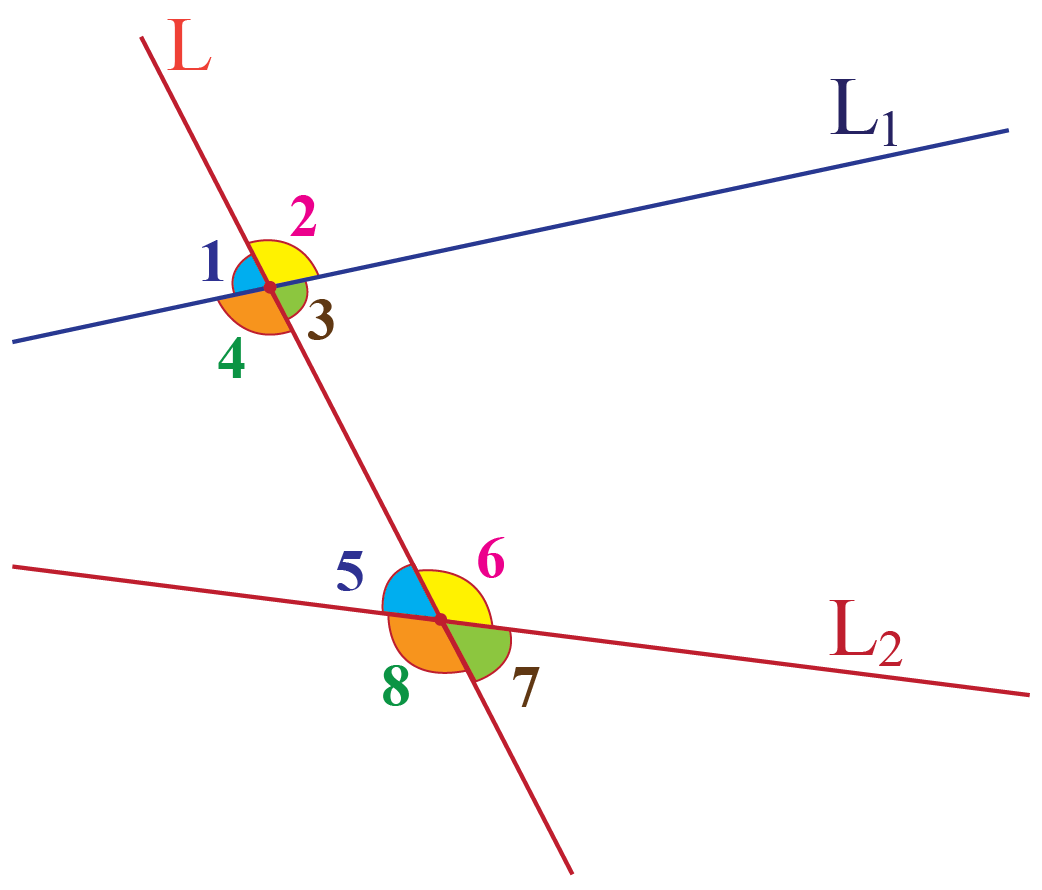 From the diagram, we can say that 'L is a transversal that cuts the lines L1 and L2, and thus line L is the transversal line.'

Construct a Transversal with Parallel Lines

The construction of a transversal is easy. First, we create two parallel lines.

Now, we construct the angle (at which we want to create the transversal) on the first line (say \(x^o\)) as shown. 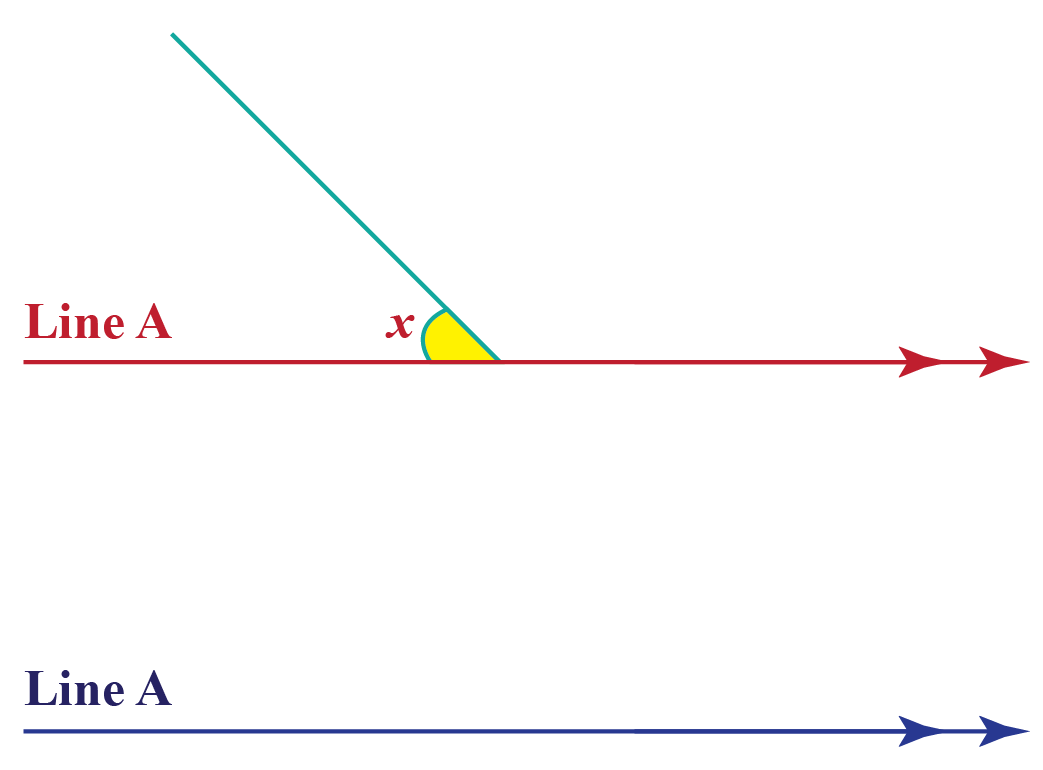 Further, we extend this constructed angle up to the point it covers both the parallel lines as done here. 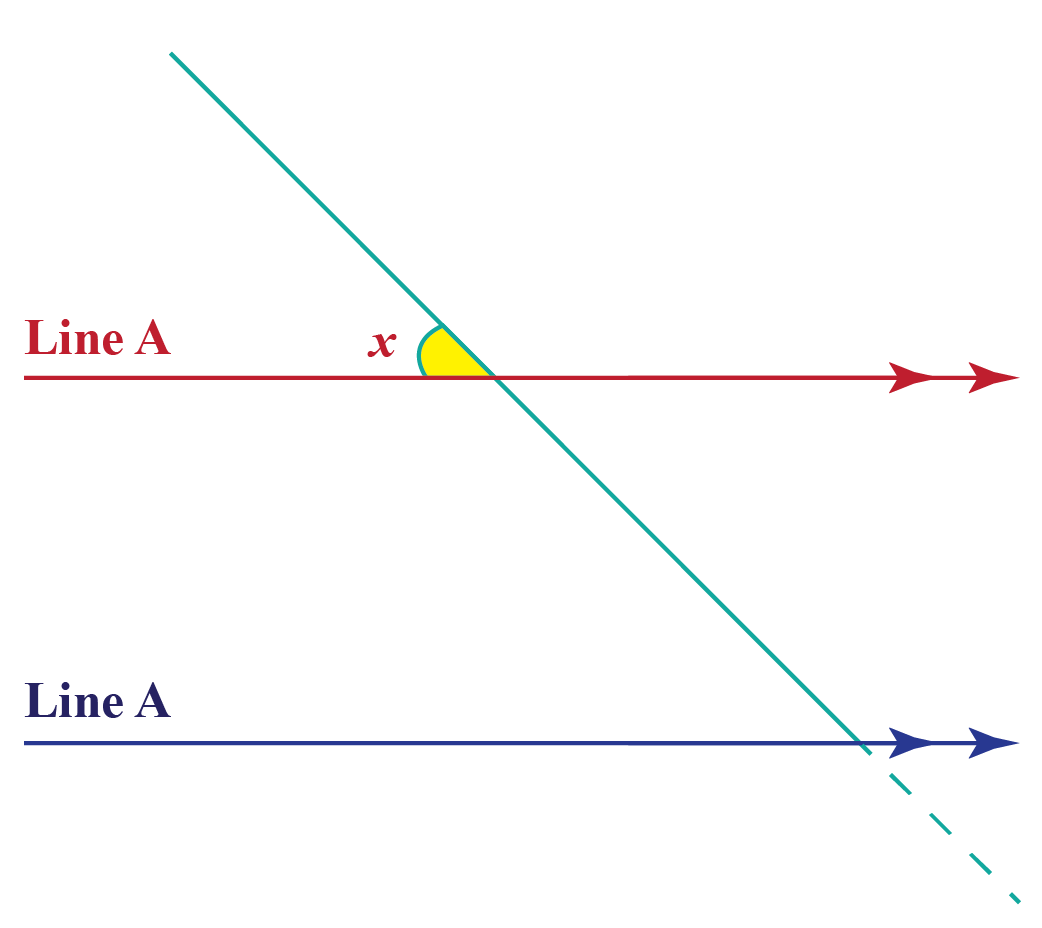 So now here is what we get: Our transversal on the two parallel lines at the desired angle (\(x^o\)).

What Are Transversal Angles?

When two parallel lines are cut by a transversal, a number of angles are formed by these two intersections.

From the given diagram, if we try to organize the angles on the basis of the relative positions they occupy, we get the following categories of angles :

The following pairs of angles are corresponding angles:

The following pairs of angles are alternate interior angles:

The following pairs of angles are alternate exterior angles:

The following pairs of angles are co-interior angles:

Let us now have a look at some solved examples on transversals.

Consider the following figure, in which L1 and L2 are parallel lines: 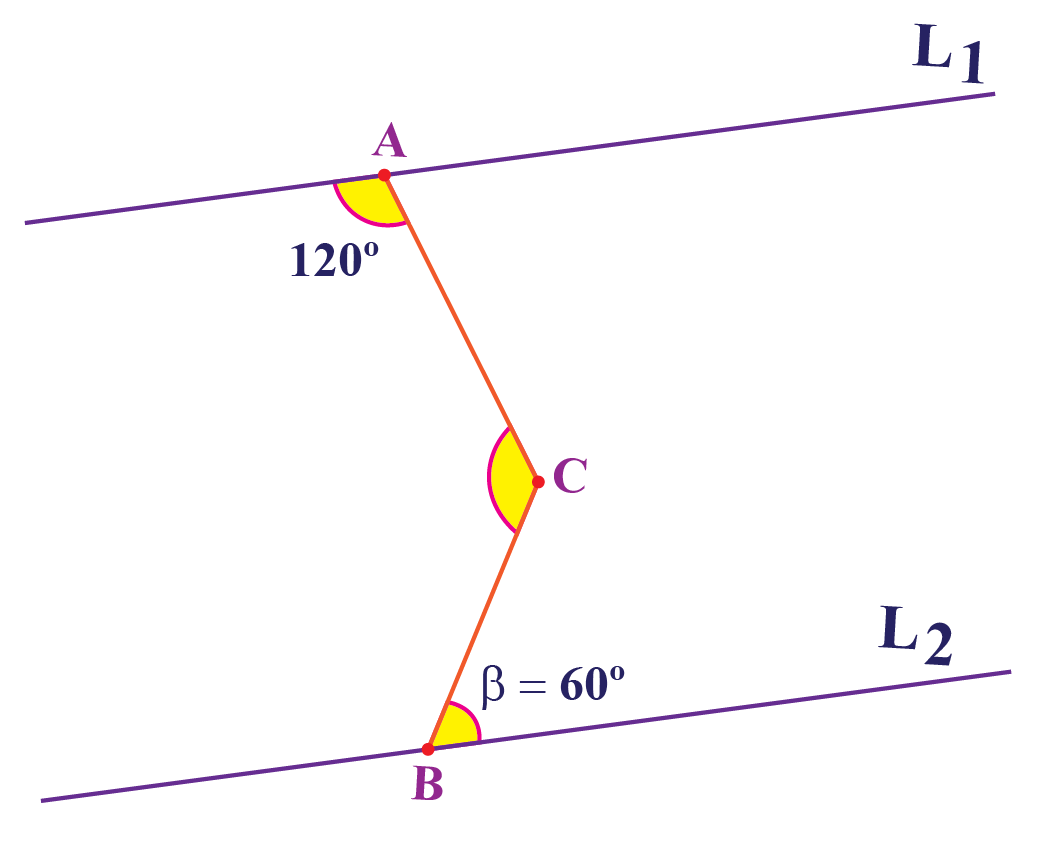 Through C, draw a line parallel to L1 and L2, as shown below: 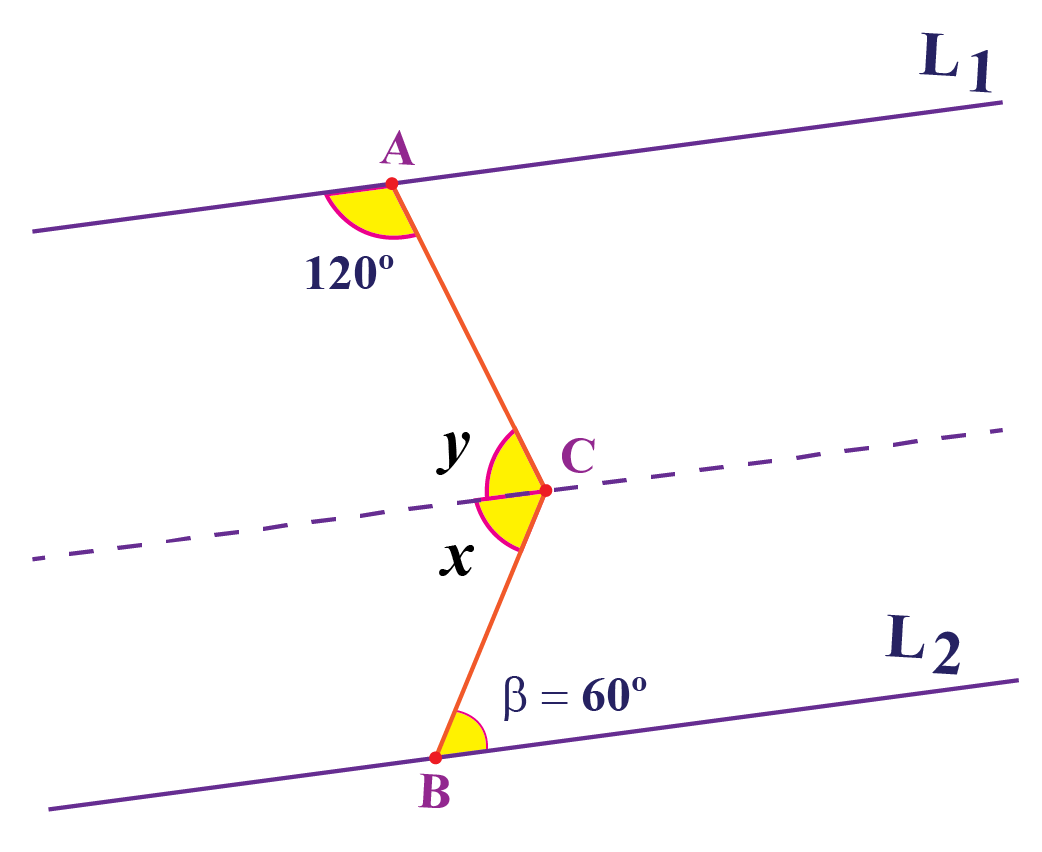 Consider the following figure, in which L1, L2, and L3 are parallel lines. The line AC is perpendicular to L3, as shown: 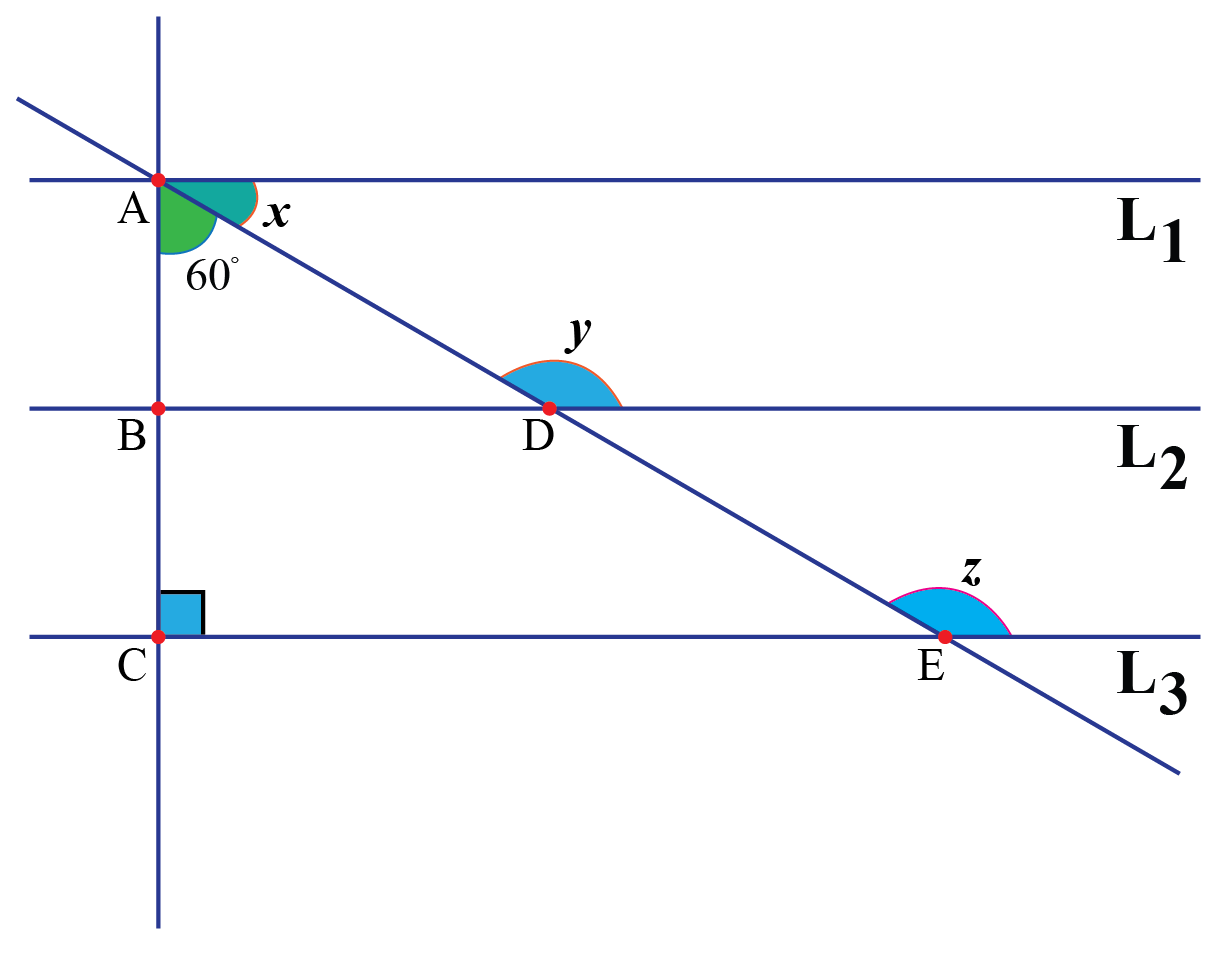 Since AC ⊥ L3, it will be perpendicular to each of the other two parallels as well. This means that:

Through A and C, drawn two lines perpendicular to AX and CY. Through B, draw a line parallel to these perpendiculars, as shown (the three dotted lines are parallel): 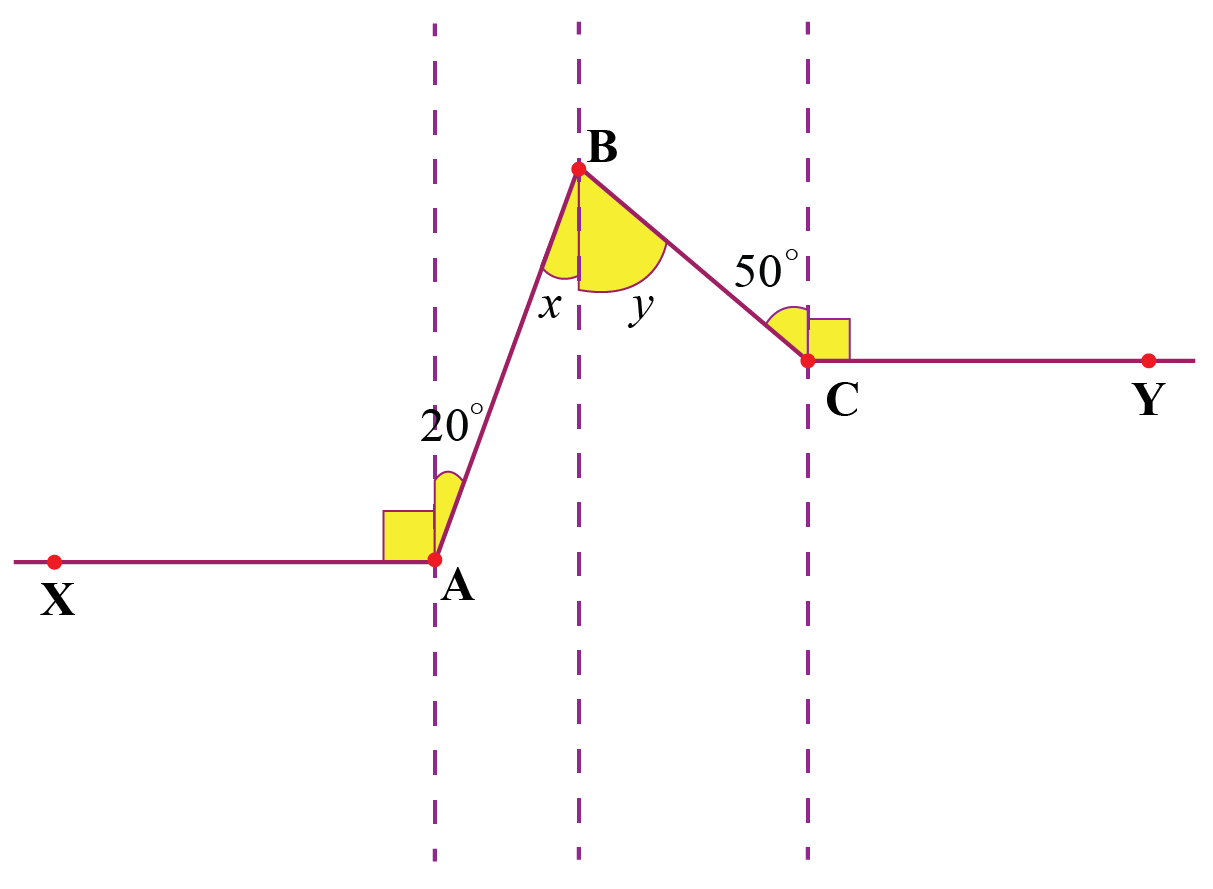 Note how we have marked the various angles. Clearly,

Three parallel lines are intersected by a transversal, as shown below: 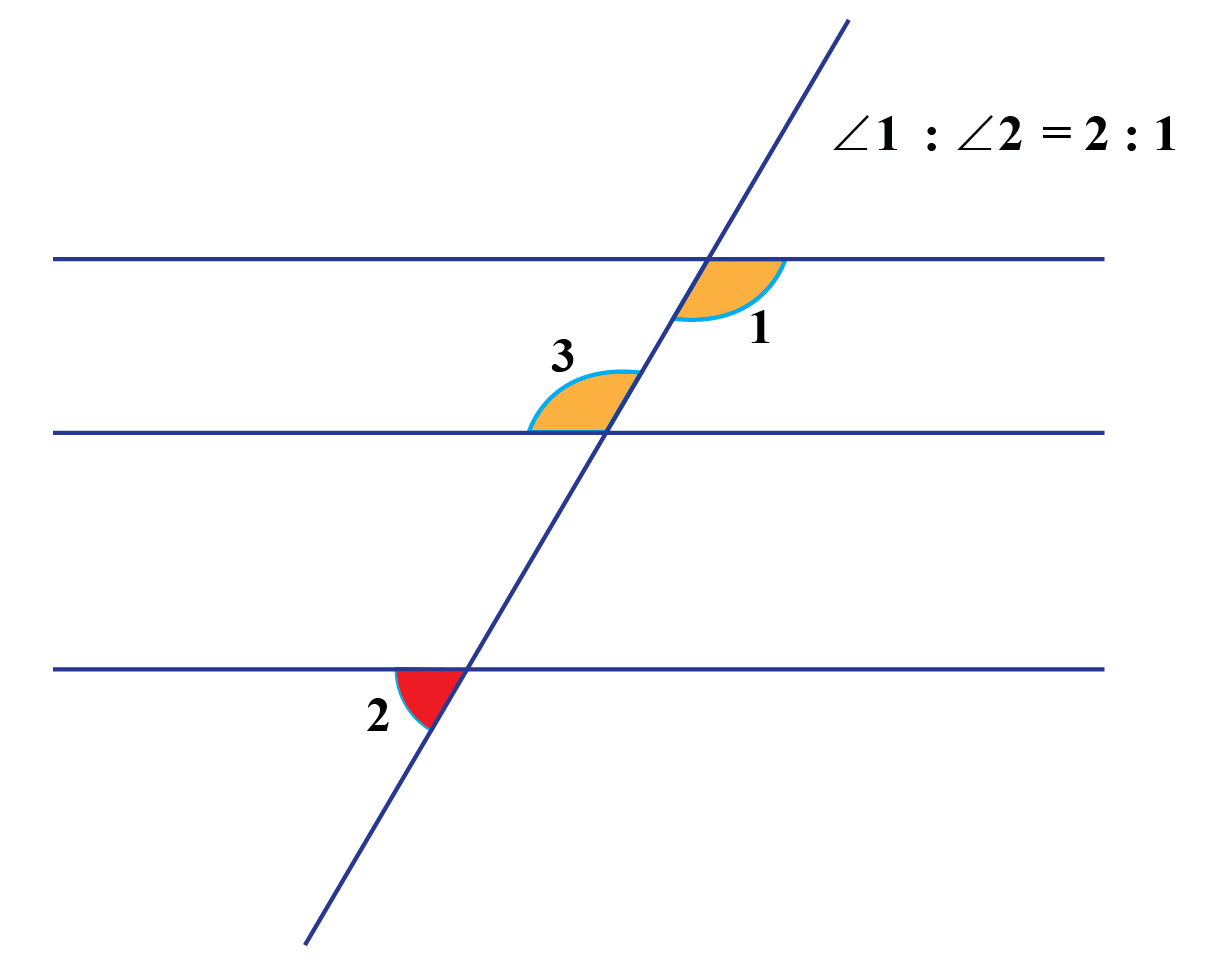 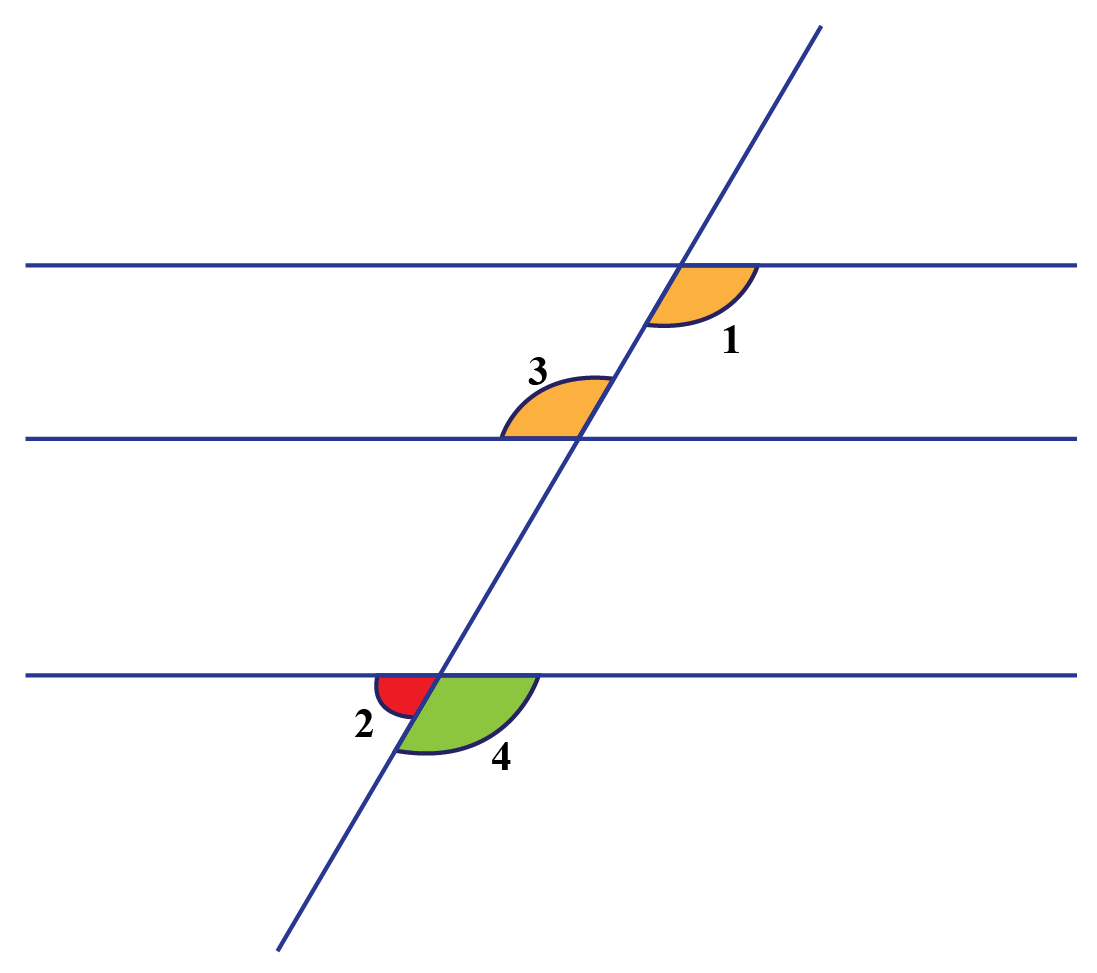 Using these two facts, it is easy to conclude that:

And hence we get

Consider the following figure, in which L1 \(\parallel \) L2: 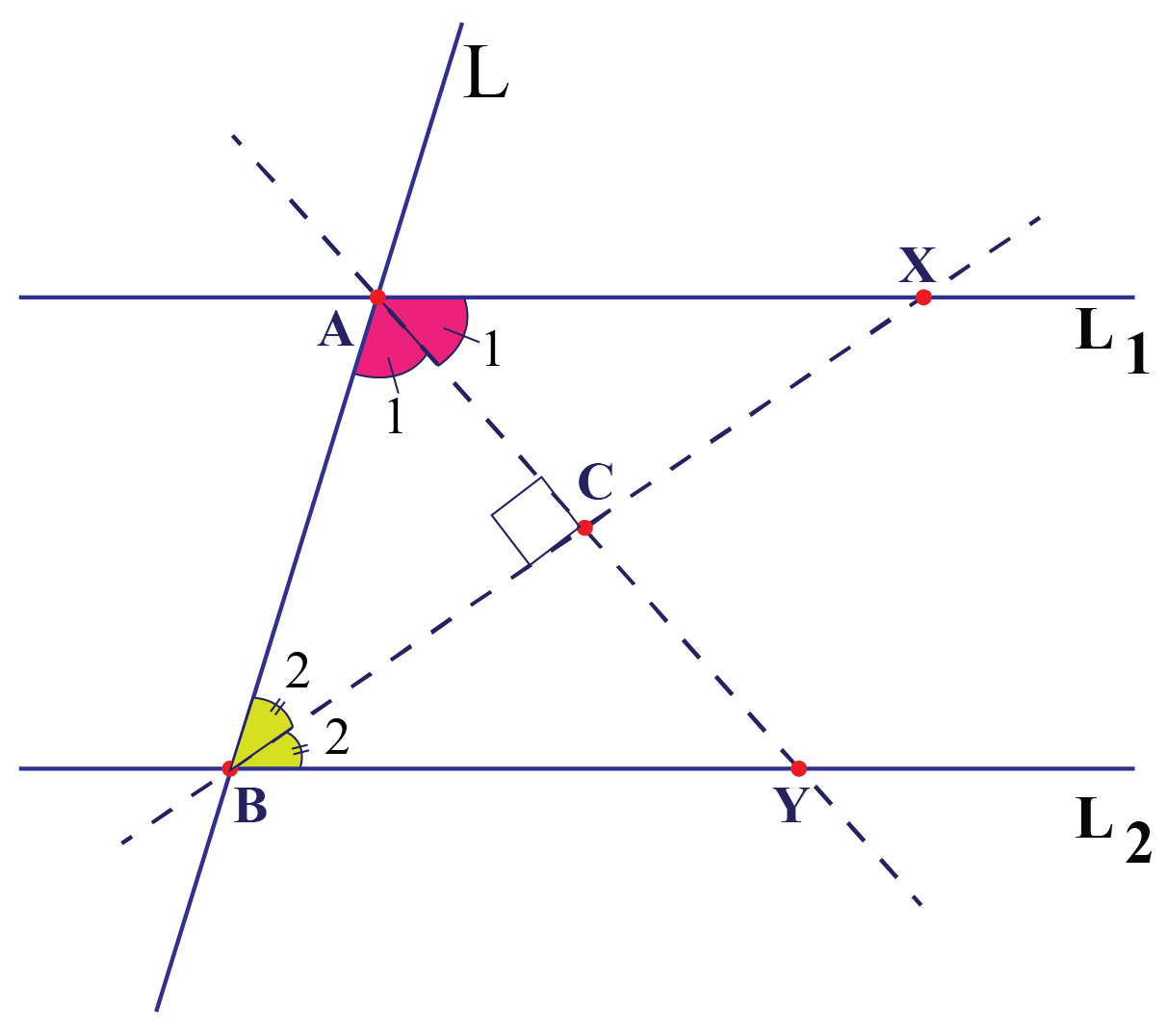 Now, in ΔACB, we apply the angle sum property:

Hint: Opposite angles of the formed quadrilateral are found to be equal in the given scenario.

Here are a few activities for you to practice. Select/Type your answer and click the 'Check Answer' button to see the result.

1. Can transversal lines be straight?

Yes, in fact, transversal lines have to be straight lines that stretch throughout the given parallel lines.

2. How many angles are formed by the transversal?

3. Do transversal lines have to be parallel?