When a non-zero whole number is divided by another non-zero whole number that leaves a remainder that is not equal to zero, it results in a decimal number. Any number can be expressed as a decimal by proceeding with a '.' and a 0. For example, 3 can also be written as 3.0. Decimal numbers have a whole number part and a fractional part. These two parts of numbers are separated by a dot or a point(.). A fraction consists of a numerator and a denominator. When the numerator is divided by the denominator in a fraction, it either results in a whole number or a decimal. Sometimes we may require to convert the fraction into a decimal form. For example, when we say 1/2 kilograms, it can more precisely be expressed when the fraction is converted to decimal as 0.5 kilograms. Let us look at how it is useful and how the conversion from a fraction to a decimal is done.

Fractions are converted to decimals to express and read numbers easily. For example, let us say that the diameter of a circle is 9 units. To calculate the radius we need to divide it by 2. 9/2 gives 4.5 as the answer. Therefore, converting the fraction 9/2 to 4.5 gives a clear picture of how much is the radius of the circle. Fraction to decimal conversion is more common in the conversion of metric units. For example, 1 kilogram equals 1000 grams. So, how do we express the value of 500 grams? We divide 500 by 1000, which gives 1/2 or 0.5. Sometimes, there are fractions where the fractional part never terminates. For example, the value of pi in math has a non-terminating decimal part. The fraction to the decimal table shows some of the fraction to decimal conversions from 1 to 1/10.

We can observe, that the numerator is the same and as the denominator increases, the corresponding decimal values of all the fractions decreases.

Conversion of Fraction to Decimal

To convert a fraction to a decimal, follow the steps given below:

Let us look at some examples of how to do this. 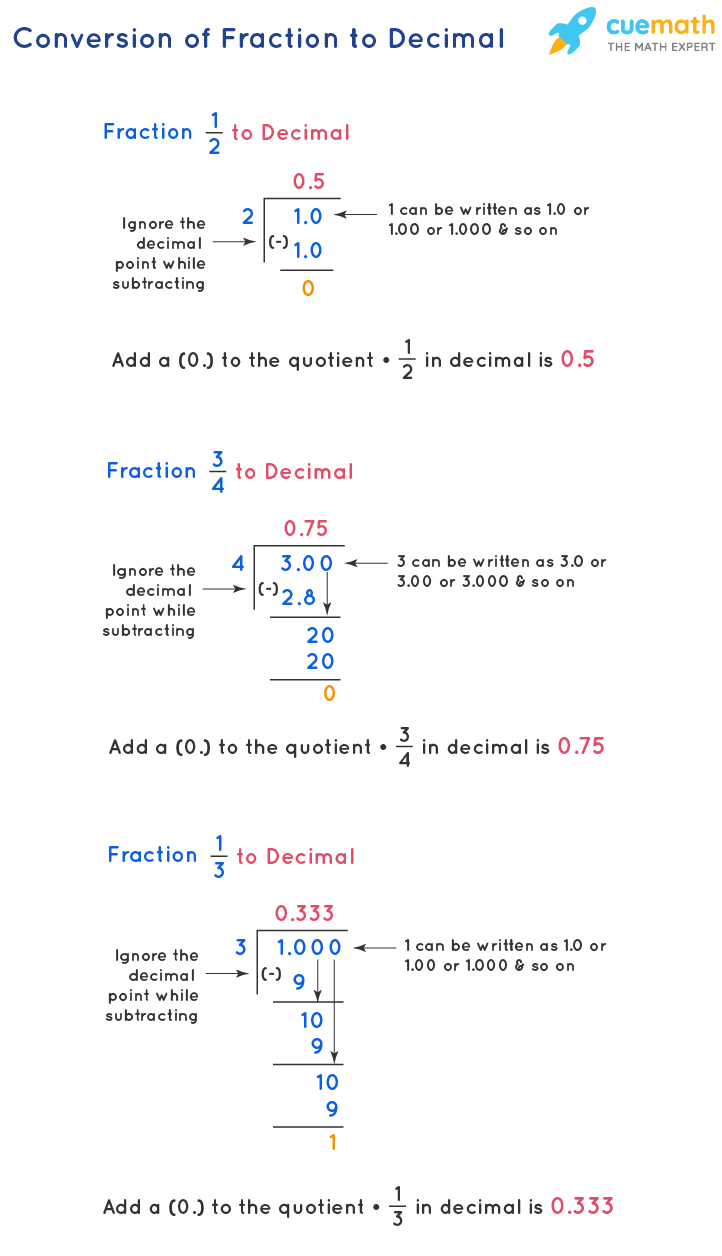 Uses of Fraction to Decimal Chart

Fraction to decimal chart gives us the values of some most commonly used fractions in decimals. Fractions can be less than 1 or greater than 1. Fractions that are less than 1 have a numerator less than the denominator. They are called proper fractions. Fractions that have a numerator greater than the denominator are called improper fractions. Writing a fraction as a decimal gives more precision. Decimals come into the picture when we measure the length of an object, calculating the weight of objects, and many more. Every time we will not be left with an integer or a whole number as an answer. To be more clear on how the numbers will look like, we use decimals. 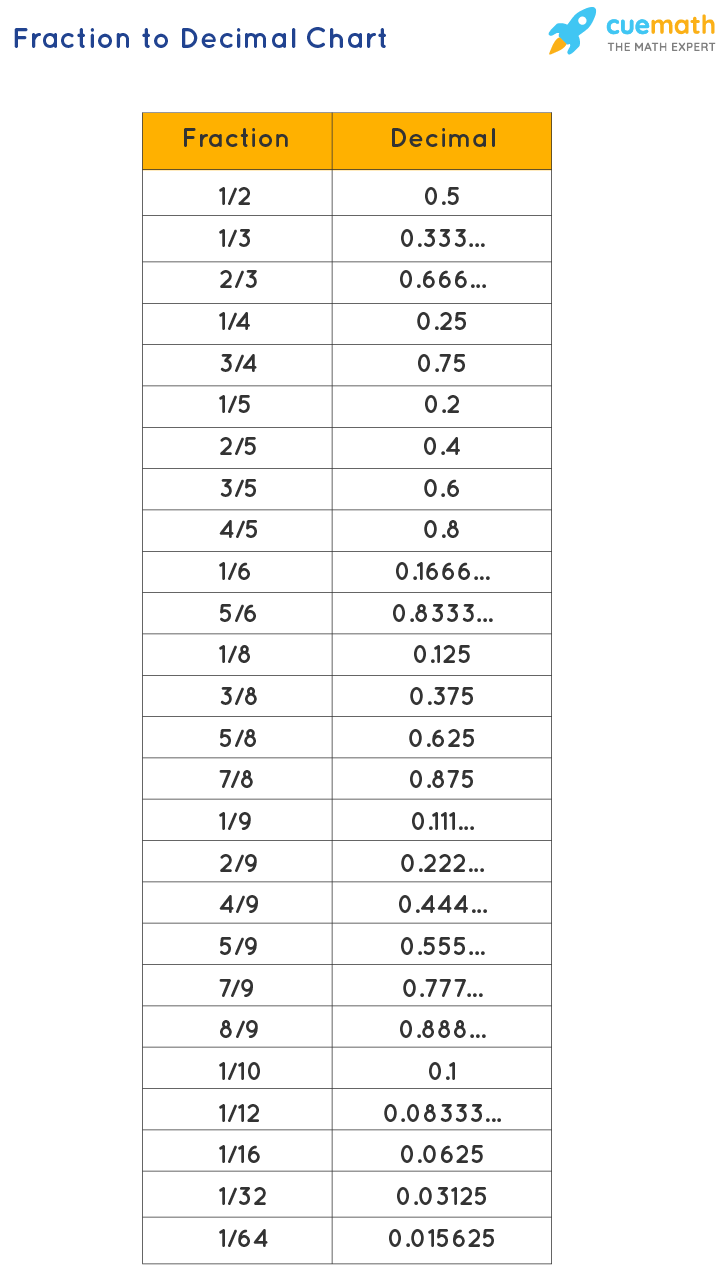 Here are a few topics that are related to the fraction to decimal chart.

FAQs on Fraction to Decimal Chart

How Do You Convert a Fraction to a Decimal?

To convert a fraction to a decimal, follow the steps given below.

Using the Fraction to Decimal Chart, Convert 1/32 into Decimal.

List Down the Steps of Conversion of The Fraction 2/5 to Decimal.

Using the fraction to decimal chart the value of 1/16 is 0.0625. This conversion is done by dividing 1 by 16, which means 1 is the dividend and 16 is the divisor until we get the remainder as 0 or a number less than the divisor.

What is the Value of 5/8 as per the Fraction to Decimal Chart?