Asymptotes are imaginary lines to which the total graph of a function or a part of the graph is very close. The asymptotes are very helpful in graphing a function as they help to think about what lines the curve should not touch.

Let us learn about asymptotes and their types along with the process of finding them with more examples.

What is an Asymptote?

An asymptote is a line being approached by a curve but never touching the curve. i.e., an asymptote is a line to which the graph of a function converges. We usually do not need to draw asymptotes while graphing functions. But graphing them using dotted lines (imaginary lines) makes us take care of the curve not touching the asymptote. Hence, the asymptotes are just imaginary lines. The distance between the asymptote of a function y = f(x) and its graph is approximately 0 when either the value of x or y tends to ∞ or -∞.

There are 3 types of asymptotes.

Here is a figure illustrating all types of asymptotes. 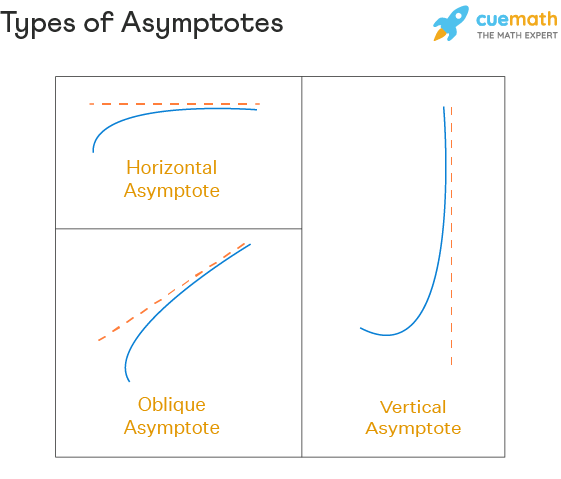 How to Find Asymptotes?

Since an asymptote is a horizontal, vertical, or slanting line, its equation is of the form x = a, y = a, or y = ax + b. Here are the rules to find all types of asymptotes of a function y = f(x).

Let us study more about the process of finding each of these asymptotes in detail in upcoming sections.

How to Find Vertical and Horizontal Asymptotes?

The method to find the horizontal asymptote changes based on the degrees of the polynomials in the numerator and denominator of the function.

To find the vertical asymptote of a rational function, we simplify it first to lowest terms, set its denominator equal to zero, and then solve for x values.

Note that, since x is canceled while simplification, x = 0 is a hole on the graph. It means, no point on the graphs corresponds to x = 0.

We can see both HA and VA of this function in the graph below. Also, observe the hole at x = 0. 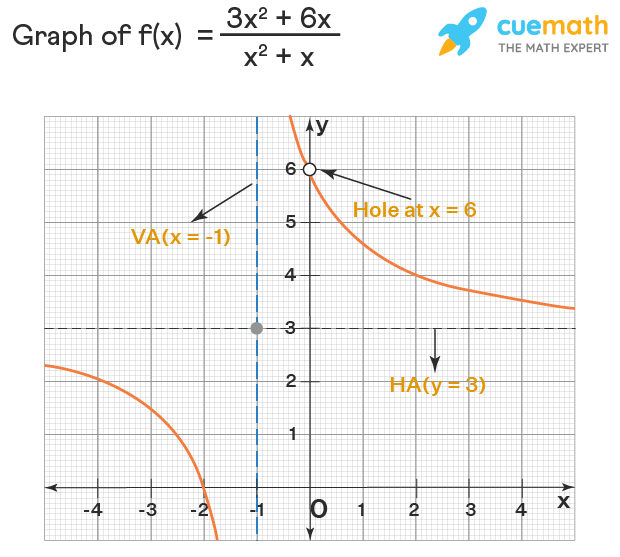 Difference Between Horizontal and Vertical Asymptotes

Here are a few differences between horizontal and vertical asymptotes:

How to Find Slant Asymptote?

The slant asymptote of a rational function is obtained by dividing its numerator by denominator using the long division. The quotient of the division (irrespective of the remainder) preceded by "y =" gives the equation of the slant asymptote. Here is an example. 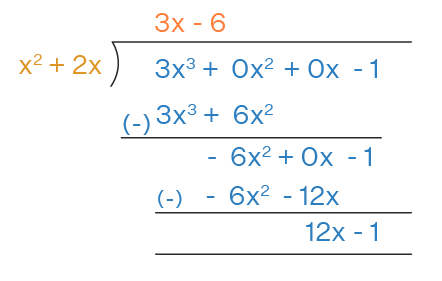 Hence, y = 3x - 6 is the slant/oblique asymptote of the given function.

What is the Meaning of Asymptotes?

Asymptotes are imaginary lines in the graph of a function to which a part of the curve is very close to but an asymptote never touches the graph. There are 3 types of asymptotes a function can have:

How to Find Horizontal and Vertical Asymptotes of an Exponential Function?

We can also draw the exponential graph to identify the asymptotes.

An asymptote is a horizontal/vertical/slant line to which the curve is very close to but the curve doesn't touch the asymptote.

What are the Rules to Find Asymptotes?

Here are the rules to find asymptotes of a function y = f(x).

How to Find Horizontal and Vertical Asymptotes of a Logarithmic Function?

How to Find Oblique Asymptote?

A rational function has an oblique asymptote only when its numerator has a degree just one more than that of its denominator. It is obtained by dividing the numerator by its denominator using the long division of polynomials.

How are Asymptotes Helpful in Graphing Rational Function?

Asymptotes are really helpful in graphing functions as they determine whether the curve has to be broken horizontally and vertically. While graphing, the curve should never touch the asymptotes.

Does Every Rational Function Have a Slant Asymptote?