Algebra helps in the representation of different situations or problems as mathematical expressions. The concepts that come under algebra 1 or elementary algebra include variables, evaluating expressions and equations, properties of equalities and inequalities, solving the algebraic equations and linear equations which have one or two variables, and so on.

Algebra 1 consists of the general/basic concepts of algebra. It introduces evaluating equations and inequalities, real numbers, and their properties, which include additive and multiplicative identities, inverse operations, and the distributive and commutative properties. In algebra 1, we will also be introduced to the concept of polynomials, and will also incorporate a bit of geometry to calculate the area, volume, and perimeters of shapes using algebraic expressions instead of numbers.

Algebra 1 or elementary algebra deals with solving the algebraic expressions for a viable answer. In algebra 1, simple variables like x, y, are represented in the form of an equation. Based on the degree of the variable the equations can be categorized into different types, namely linear equations, quadratic equations, cubic equations, and so on. Linear equations are of the forms of ax + b = c, ax + by + c = 0, ax + by + cz + d = 0. Elementary algebra based on the degree of the variables, branches out into quadratic equations and polynomials. A general form of representation of a quadratic equation is ax2 + bx + c = 0, and for a polynomial equation, it is axn + bxn-1+ cxn-2+ .....k = 0.

The rules for different properties under algebra 1 can be understood better as shown below, 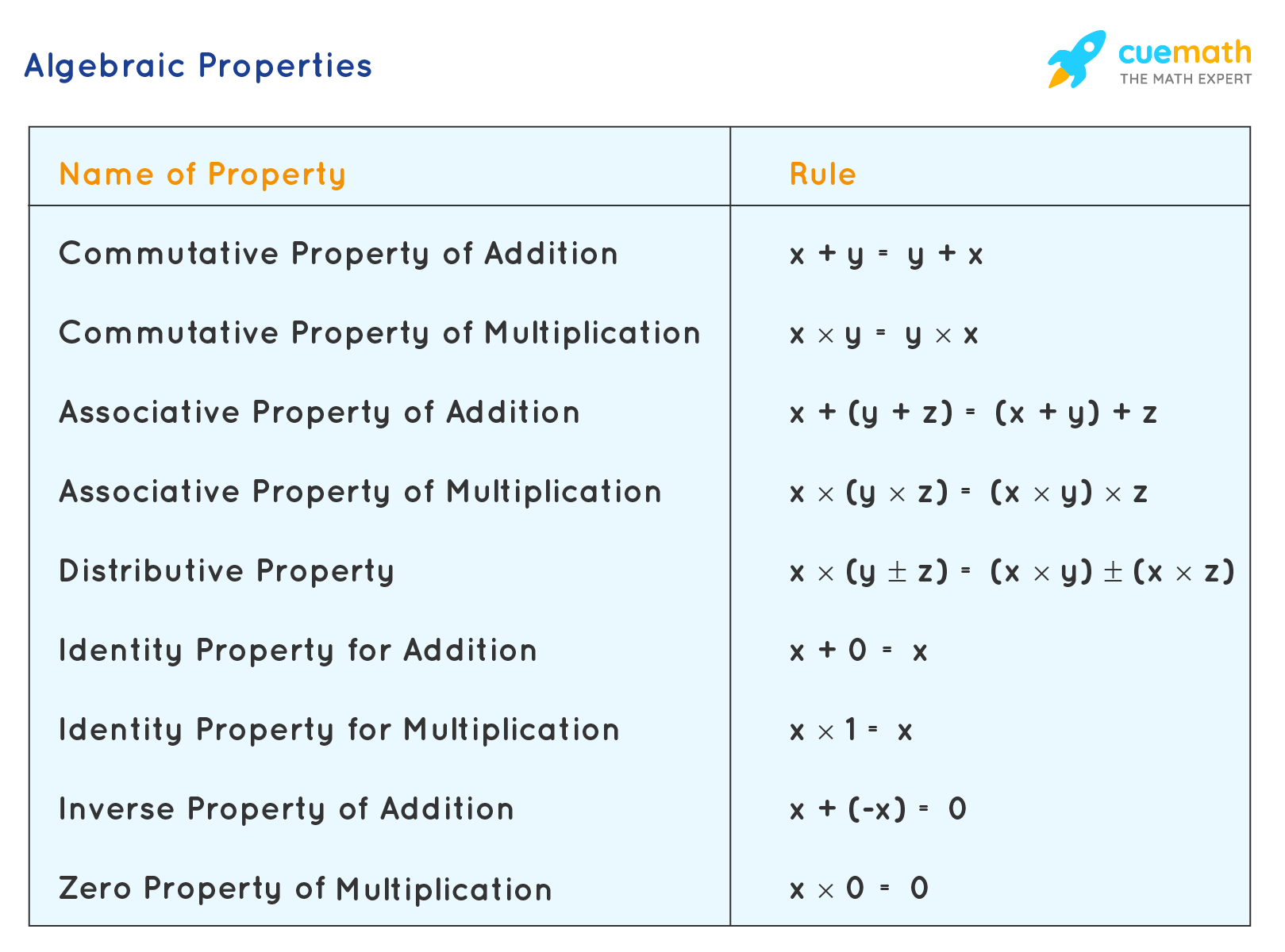 Chapter 1: Real Numbers and Their Operations

Chapter 6: Polynomials and Their Operations

Chapter 7: Factoring and Solving by Factorization

The basic laws of algebra are the associative, commutative, and distributive laws that are presented in the table below:

Here are the list of formulas that are very useful in solving Algebra 1 problems.

Difference Between Algebra 1 and Algebra 2

Algebra 1 and Algebra 2 can be distinguished based on the complexity and use of algebraic expressions. The following table explains the important differences between algebra 1 and algebra 2.

Tips and Tricks on Algebra 1

What Will You Learn in Algebra 1?

What is Considered Algebra 1?

Algebra 1 consists of the general concepts of algebra. It introduces evaluating equations and inequalities, real numbers, and their properties, which include additive and multiplicative identities, inverse operations, and the distributive and commutative properties.

What is the Difference Between Algebra 1 and Algebra 2?

The difference between Algebra 1 and Algebra 2 can be understood using the following points:

What is Standard Form in Algebra 1?

A standard form in Algebra 1 is a form of writing a given mathematical concept like an equation, number, or an expression in a form that follows certain rules.

How to Learn Algebra 1 Fast?

The concepts of algebra 1 can be mastered by following certain instructions. The key points given below will help you ensure a thorough graphing of elementary algebra.

What Grade is Algebra 1?

Algebra 1 or elementary algebra is the first math class you are required to take as part of your middle school. We study real numbers, exploring solving, writing, and graphing linear equations in this part of Algebra. Also, polynomials, as well as quadratic equations and functions are included in Algebra 1.

What Topics are Covered in Algebra 1?

The topics covered in algebra 1 are divided into different chapters. These chapters can be broadly classified into the following categories:

Algebra 1 is the building block of algebra 2. Algebra 2 is a higher and more complex course, hence algebra 2 is a lot harder than algebra 1.

What is Algebra 1 Equations?

What is the First Thing you Learn in Algebra 1?

The first thing students learn in algebra 1 is real numbers and their operations.

What are the Prerequisites to Understand Algebra 1 Better?

To understand Algebra 1, it is an advantage if you know the foundations of arithmetic, integers, fractions, decimals, percent, ratio, proportion, probabilities, an introduction to geometry, and, right triangles.